Miss India Manushi Chhillar 20-year-old medical student from India has won the Miss World 2017 title at the Miss World pageant in Sanya, Hainan province, China on November 18, 2017. This winning takes India to joint most successful country in the beauty pageants history along with Venezuela throughout the pageant’s 67 year history. 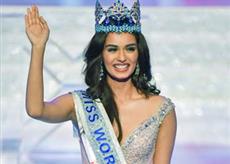 India so far had made six winners in the prestigious competition and the world's popular one is actress Aishwarya Rai and the Indian actress Priyanka Chopra.

The Miss World website indicates that Miss Manushi Chhillar is an Indian classical dancer and painter. Her ambition is to open number of nonprofit hospitals in the rural areas of India.

After her achievement Miss Chhillar went on to tweet as, "Thank you, everyone, for your constant love, support."This one's for India.” Last year title holder Stephanie del Valle of Puerto Rico came to the stage and crowned the Indian miss Chhillar as the winner of Miss World 2017. Stephanie Hill of England and Andrea Meza of Mexico became as the runners-up in this miss world 2017 event.

This competition had returned to Sanya, in China’s Hainan Island for the 7th time, where the event was last held in 2015.

Miss Universe crown went to Demi-Leigh Nel-Peters on Sunday. The event took place at The AXIS Theater at Planet Hollywood resort on the Las Vegas Strip on 27th of November 2017.